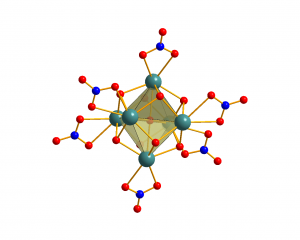 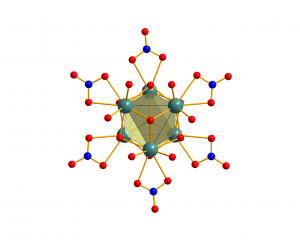 We study the luminescent properties of coordination polymers to:

These spectra correspond to two compounds, in dark green the starting complex and in light green the same complex functionalized so as to enhance its luminescence. 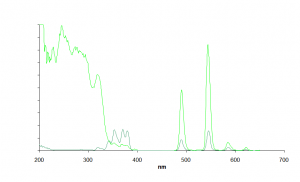 We are often surprised by Qy values, because it is not an absolute measurement of the light emitted by the sample: the number of emitted photons is divided by the number of absorbed photons, not by that of the received ones. So, some compounds with a weak UV absorption may present a weak light emission but a high quantum yield.

In order to evaluate the absolute light emission properties of a luminophore, we use a fluxmeter to measure the UV light received on the surface (irradiance: W/cm²) and a lumenmeter to measure the visible light emitted by the surface (luminance: cd/cm²). After conversion of candelas in lumens (related to the 3D geometry of the measurement), the ratio of lm/W (i.e. luminous efficacy) can be compared with every other light emitting device (for example a commercial source of light).